Long time no see! In theory, you’ve subscribed to the No Country Studio newsletter some time in the past because I, Misha Berveno, the managing editor of this thing, asked you to. If you’re no longer interested, you can unsubscribe instantly.

Welcome to the gist of — a missive from No Country Studio about words that make the world go round. In the letters that follow, we’ll cover the business of writing and tangentially related things to help you write better.

the gist of is about explaining the core of ideas you rarely see published online, assisted with examples from history and my own experience. The heuristic used for selecting topics aims to follow the Lindy effect: Will this be valuable in 5 years?

There are going to be seasons and episodes. Seasons are thematic and overarching. Episodes are specific and issue-driven.

The first season has 12 episodes planned, sent roughly once a month, and is devoted to verbal identity.

So what the hell is verbal identity?

Sent from Vancouver, BC.

What is verbal identity?

To start, let’s frame the space where verbal identity exists.

What is a brand? A particularly good definition comes from Seth Godin:

A brand is the set of expectations, memories, stories and relationships that, taken together, account for a consumer’s decision to choose one product or service over another.

Brand identity then is a system that applies verbal and visual identity to differentiate products and services, and influence consumer decisions.

Now we can define verbal identity:

Verbal identity is a unique and consistent positioning of a company on the market through the use of language.

A few key words to unpack:

Why should companies care about verbal identity?

Good verbal identity is about creating consistency in communication.

Without a language framework to rely on, it’s easy to descend into boring and soulless corporate-speak on the one hand or completely overdo it with Yogababble, as Scott Galloway puts it, on the other.

When verbal identity is clearly defined, everyone in the organization can align around a single source of truth. Communication derived from the verbal identity will convey and reiterate the same message over time, creating consistency that leads to a strong brand.

So where then does visual identity fit in?

Historically, visual identity had more prominence. Everyone recognized the importance of logos, brand colours and typography. Verbal identity was mostly confined to slogans and voiceovers in ads.

With the rise of email, social media and chat platforms, companies realized they needed more personality and consistency in their voice — the primary task of verbal identity.

Looking at brand books today, we can see that verbal identity is rarely presented without visual identity. Like yin and yang, they interconnect to form full brand identity. At the same time, the ratio of visual to verbal identity used tends to vary:

The evolution of verbal identity

Before all of us went online, companies primarily communicated with their target audiences through ads.

Advertising came before verbal identity but shared a few similar goals. To position a company in the market in a certain way, it needed to be unique and consistent, using the same visual and verbal language over and over again.

In fact, the pendulum of advertising has been swinging from primarily visual to primarily verbal language and back for over 100 years.

Take the work of Alphonse Mucha for the British company Cycles Perfecta in 1902.

Even though it’s advertising bicycles, it doesn’t feel like the ads we’re used to seeing today — it feels like art.

After the Great Depression and through the WWII, ads started to use slogans that informed the visuals. Here’s Paul Hesse for the US Navy Department during the war.

The corporate world didn’t lag behind either.

The golden age of advertising (1960–80s) started with little collaboration between copywriters and art directors (i.e. designers). The former would simply send approved copy to the latter to mock up.

DDB (Doyle Dane Bernbach) was the first agency that put both roles on an equal footing, which resulted in years of brilliant campaigns, such as We Try Harder for Avis.

In 1980s, the visual-verbal collaboration was at its peak, exemplified by the Prouder, Stronger, Better ad from Ronald Raegan’s re-election campaign of 1984. 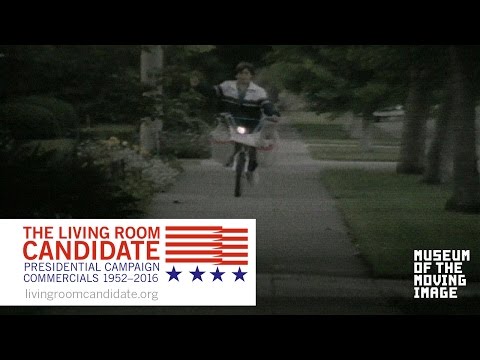 By the turn of the century, however, the business of advertising took a steep downward drop.

Today, advertising is centred around brand building (rather than selling) through storytelling. Saving Simon, a 2021 ad for Apple directed by Jason Reitman and Ivan Reitman, is a good example.

The rise of YouTube and social media has elevated the role of verbal identity. With more interactive communication channels to manage, companies have to ensure that their voice is consistent throughout, reinforcing the desired brand perception.

The elements of verbal identity

Verbal identity is a collection of statements that a company can rely on to produce consistent messaging. Since every company is different, the combination of elements comprising their verbal identity would be unique as well, from a few core statements to a thick brand book.

In general, there are 10 main verbal identity elements.

Note: A verbal identity is primarily an internal guide. However, companies often reveal parts of it to the public to reinforce their positioning

The upcoming the gist of issues will cover each verbal identity element in more detail.

You just read an issue of No Country Studio. You can also browse the full archives of this newsletter.